Skip to content
“Richard is everything I was looking for in a piano teacher for my children as he is not only a gifted pianist and performer but also a gifted teacher. In my experience many talented people are not natural teachers and do not have the teaching skills to impart their knowledge effectively to their pupils or have the ability to see what is going for the pupil in their musical journey. He never fails to put my sensitive child at ease and he really understands some of their frustrations and anxieties they are feeling. He is not only very talented and professional but a kind and very approachable person and I feel at ease to discuss any aspect of my child’s piano lessons with him. My youngest daughter changed piano teachers to Richard nearly a year ago and as a pianist she is unrecognisable. She has so much more confidence, her technical ability is greatly improved and most importantly for me she has regained her love for playing. I feel so lucky to have found Richard.”
Parent of 9 yr old Piano Student

“I can always rely on Rick to come up with edgy and melodic arrangements that never fail to surprise and delight!  I have worked with some of the top arrangers in the world, including Paul Buckmaster, Michael Kamen and Jerry Hey; I would include Richard Benbow in that list.”

“Rick is a joy to work with. He has a wealth of knowledge and experience, in a broad range of musical disciplines, all the way from classical, through rock and progressive rock, to electronica and beyond. This gives him a rare ability, as an arranger, to stylistically tune into the specific needs of an individual project. Whether we are working within the traditional orchestral palette, or in the esoteric world of electronic music, and radiophonics, Richard’s musical sensibilities, as an arranger and keyboard player, are indispensable. He is equally at home, whether he is conducting a live string ensemble, or building up overdubbed layers of mellotron, clavioline, and sample-based sounds, to create the desired effect. Rick brings strong and original musical ideas to the table. He’s a good listener, and a great interpreter of other people’s ideas. He can develop a basic outline sketch into something really quite special, indeed!

I can wholeheartedly recommend Rick – I feel he would be a benefit to any project.”

“I’ve used Rick’s fantastic arrangements on several albums and projects and am soon to start another. He’s always prepared to work with you throughout the production process, mocking up ideas with samples so that you are totally happy with what you are going to get before spending money on musicians and studios. He has an innate understanding of what is needed and a very deep reservoir of ideas, but he can do simple too, and he brings a huge amount of expertise and invention to the table. When it gets to the recording process he directs the players with skill and authority and works tirelessly to get the best possible outcome. Musicians are always happy to know that Rick is writing and directing the arrangements and it’s clear the respect they have for him and his work. Highly recommended!”

“Rick was called in at short notice to work on a series of economic rock anthems with no insight into the songs, the players. In just a few hours he turned a gothic folk song into a Prog Rock Anthem through sensitive layering of textures. He has a great gift of seeing inside a piece of music and augmenting it so that it truly shines.

As well as getting the music done, Rick melted into the other band members instantly. It’s one thing to have musical intelligence, quite another to have the emotional intelligence that enables all the musicians to give of their best.
I cannot recommend him too highly, be it for composition work, sessions or live performances.”

“I have worked with Rick since 2004 and have found a reliable and incredibly talented musical partner both live and in the studio. Rick has an excellent ear for the music and can interpret my requirements as a Producer very quickly; seemingly having a natural initiative in knowing what the music itself requires. His arrangements are interesting and always appropriate, never boring or predictable unless that is what is required. His ability to orchestrate and even score ‘on the fly’ is truly remarkable and he owns an extensive knowledge of the capabilities and styles of orchestral instruments and as a result can score sympathetically and indeed reproduce the various instrument characters very effectively on the keyboard. He is exceptionally capable and flexible as a performance pianist and keyboardist and can also provide a good vocal when required. Rick understands his equipment intimately and can achieve a quality sound very quickly. He is always a joy to work with be it on stage at a theatre performance or for hours on end in a darkened studio and always does his utmost to please the producer and deliver professional results in a timely manner. He has perfect pitch to boot! The value I enjoyed from Rick on ‘The Nursery Rhyme Collection’ project was extremely high and he, without any doubt, contributed significantly to the success of these products in the marketplace. Rick has become a kind friend over the years and I hope to undertake ongoing projects with him in the future.”

“I’ve known Rick Benbow since 1996 and have never in that time been less than amazed at what a wonderful musical talent he possesses.I recently had the pleasure of working with Rick Benbow on the ‘Inside, I’m Walking On Clouds’ charity single for West Sussex Charity Enable Me’s 10th Birthday. I think it’s fair to say that Rick’s sublime musical arrangements and additional song writing input almost single-handedly elevated the song to a whole new level. A perfect gentleman, a gifted and intuitive musician and a fabulous command of music as both language and art form – these are the qualities and talents that Rick brings to every musical project. It’s no wonder his CV is as varied and superb as it is!”

“I have worked with Rick on many occasions and cannot praise his abilities more highly. His musicianship is a real treat especially when under time constraints. As a teacher he is able to engage and enthuse young people and as a musical director he is able to control and lead a rehearsal and performance with great skill. For me however his special gift lies in his skill as an accompanist. Rick can literally play anything thrown at him and even sometimes things that have no music, such as when a student has decided to sing a song but only has a backing track on their phone! I have no hesitation in recommending Richard.”

“I first met Rick in 2004 when we were both involved with the John Lennon Tribute Show “Come Together“ which toured UK theatres back in 2005. Rick as a keyboardist literally replaced an orchestra which was stunning to witness. I went into producing media for children. Throughout the following 6 years we recorded and produced new arrangements for 280 Nursery Rhymes and Rick was in charge for all orchestral arrangements. Rick works incredibly fast. When we booked him for the Nursery Rhyme recordings he usually arranged and recorded orchestral parts for about 30 – 40 songs in one weekend. He is able to arrange orchestral parts within minutes whilst hearing a piece for the first time. The Nursery Rhyme Collections were released in Germany and England, where they became a major success. If I need some special keyboard or orchestral arrangements today, I still ask Rick and we work together to this day.”

“In July 2015 Rick Benbow came to our wedding. I won’t use the term “performed”, as he did so much more than that. Having taken great care to understand what we were looking for, Rick very capably took charge of all musical content for the day. He composed a beautiful “bridal march” for the ceremony. Starting from scratch just a day before the wedding,, he coached and worked sympathetically with two younger amateur musicians (vocals, trombone, saxophone) in a manner which they described to me as “inspiring” to provide a program of wonderful music, contributing immeasurably to our perfect day. I might add that Rick’s duties required playing for several hours outside in soaring temperatures and full sun. And he never stopped smiling. I would also add that one of our guests, former arts critic of a very prestigious US newspaper, mentioned that he loved the piece, and asked who the very gifted composer was. Thank you so very much Rick.”

“The album could not have worked without the contributions of Richard Benbow, who co-wrote two of the songs, Jamboree and Waiting Rooms. Unlike Warner, he has gone on to be a prolific artist, and an in-demand arranger for the likes of Sneaker Pimps, Jewel, and Beth Gibbons. And it’s the arrangements on the album which surround Warner’s voice and lyrics, and give them even more of a faded-red-velvet-and-tatty-brocade character. They’re dramatic, witty, sweeping, and bombastic, with a Puckish sense of joy. Not as stark and cutting as Dickon Hinchliffe’s arrangements for Tindersticks, or as deliberately retro/cheesy as Joby Talbot’s for The Divine Comedy; Benbow’s arrangements are wonderful, Wagnerian, pleasingly detailed and distinctive in their own right. I can think of several TV shows and films which would benefit from an orchestrated score from him.”

THIS HOME IS HAUNTED: A blather about Simon Warner’s ‘Waiting Rooms’BY RARG ⋅ MAY 8, 2014

“Ola Bienkowska’s vocals during The Great Gig in the Sky are mesmerising, whilst Bobby Harrison’s own guitar work and Rick Benbow’s fine keyboard playing during a full length version of Echoes make these true highlights amongst many.”

“As well as unplugging the Telecasters and getting the acoustic guitars out, many of the songs are enhanced by string arrangements to a truly touching effect. Songs such as “Rock ‘n’ Roll” shine much more brightly than the original and their début single “Pictures Of Matchstick Men” sounds utterly splendid, given a chamber-pop pomp.”

“One song perfectly suited to the acoustic makeover is ‘Dear John’ which is underpinned by the delicate strains of the string quartet and for me is one of the album highlights. Francis Rossi puts in a heartfelt vocal performance here which really brings out the emotional content of the lyrics. This is followed by ‘In The Army Now’ which is kept fairly standard, but the addition of the string section and the odd mouth organ blast add depth and drama.”

Status Quo: Aquostic 2 That’s a Fact! reviewed by Dave Wilson for Get Ready to Rock 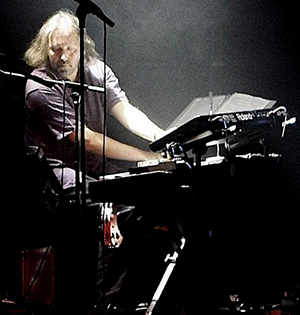